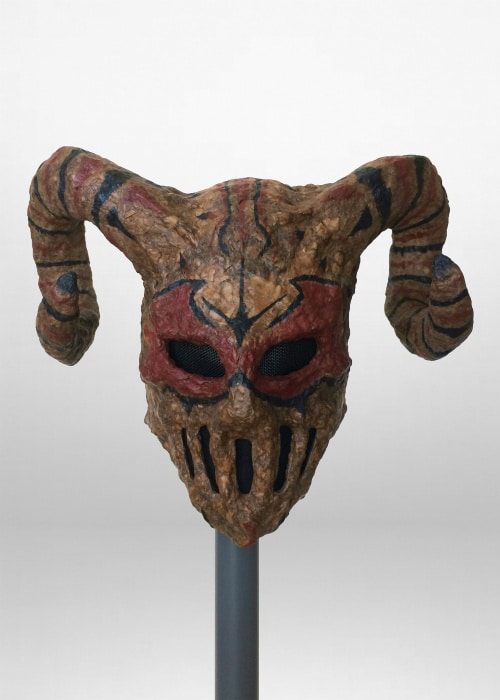 (Note: scroll down to see how this mask looks on its nifty sculptural cardboard stand!)

At some point in my travels across the Internet I came across a page about how to make papier-mache out of cardboard. It involved soaking cardboard boxes in water and then grinding them up with a paint mixing drill attachment, stirring in some type of glue and linseed oil, and maybe some other stuff I can’t remember. This gave me the idea to try cardboard myself.

Starting out, I didn’t have the right paint-mixing attachment or bucket to grind in, so I tore it up by hand after soaking it. This resulted in a flaky, chunky material. I decided to just mix it with glue like any other papier-mache I make, rather than doing some more complicated formula like the original recipe called for.

The mask began as something that would be attached with straps; then I decided to make it a full helmet; then I decided to add horns. The horns are made with coat hangers, aluminum foil, and tape, and covered in cardboard. The rest of the mask is pure cardboard with no underlying structure. It’s strong stuff so it doesn’t need it. I bulked out the horns with foil and tape to save weight and provide form rather than add strength.

There are magnets embedded inside so that mesh can be magnetically attached to the eyes and mouth. 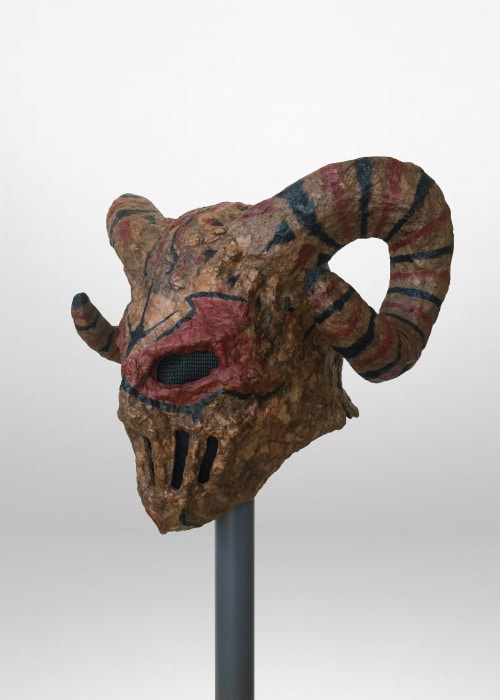 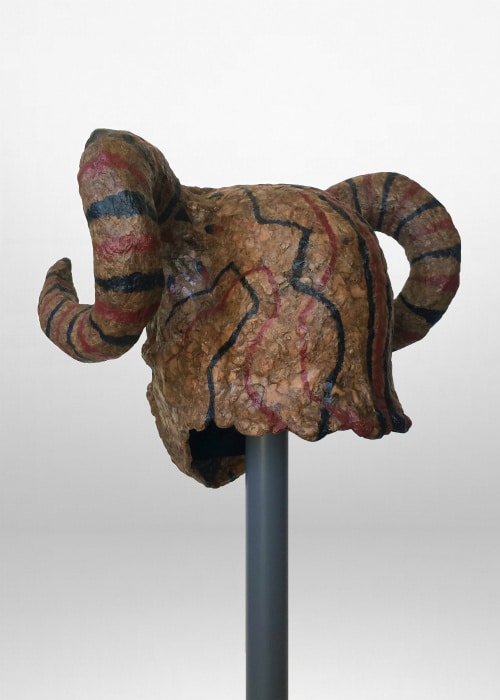 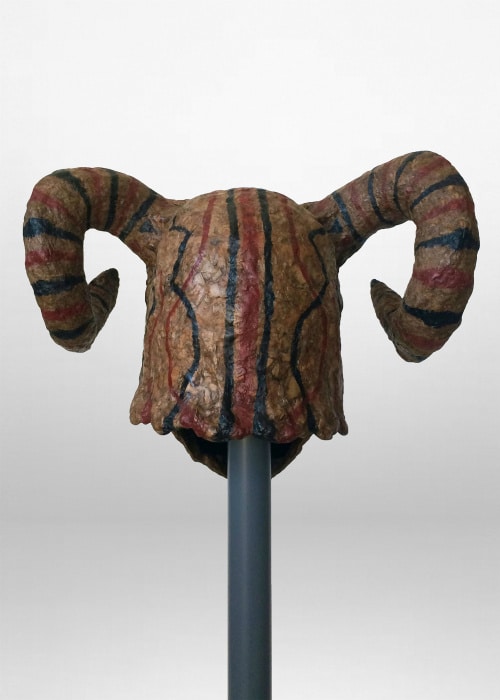 I think the cardboard looks interesting and gives this a lot of its personality, so I didn’t want to hide it under a layer of paint. But some markings seemed appropriate. I drew inspiration from pictures I saw online of “barbarian” and “post-apocalyptic” costumes and makeup. I also did some concept art drawings on the computer to try out different patterns before committing myself to anything, which was a first for me. I usually just start painting.

As I was making this I watched a video series about how to make papier-mache pumpkins (if you’re interested, you can watch them here). Those videos gave me the idea of using spar urethane varnish for waterproofing and sealing. This still shouldn’t be left out in the rain but I think the varnish added some protection, and also helped to bring out the texture of the cardboard.

I named this Titan because I think it has a big, somewhat primordial look.

Making this taught me a lot about cardboard boxes. Did you know they have personalities? Each one is a little different and makes a distinct-looking material depending on how you process it.

And here are some pictures of this on its special stand. I decided to take them outside to change things up from the white background look. 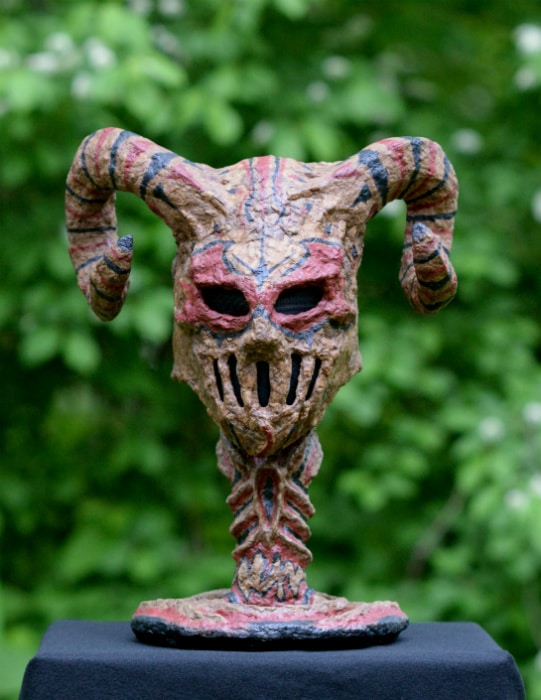 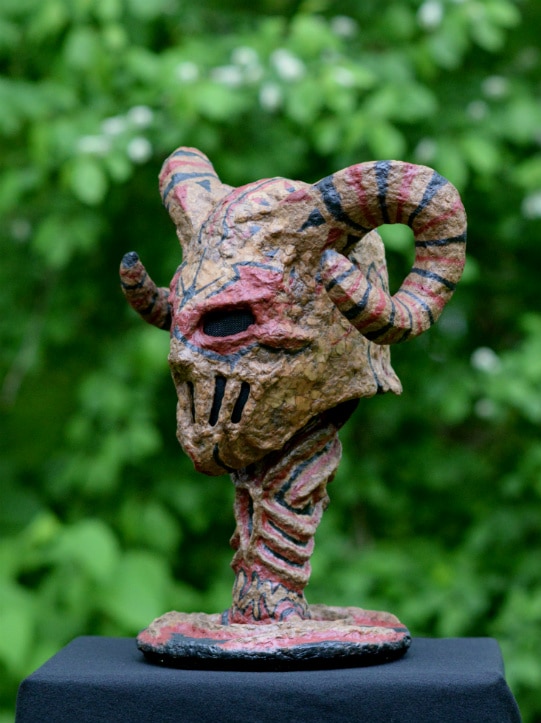 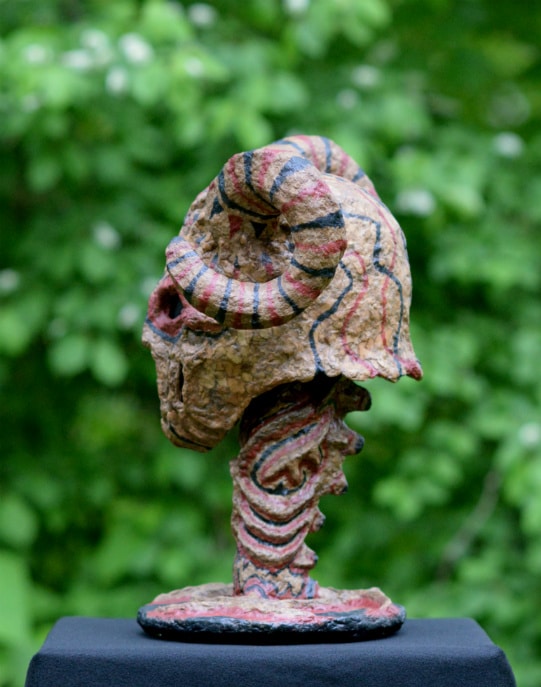 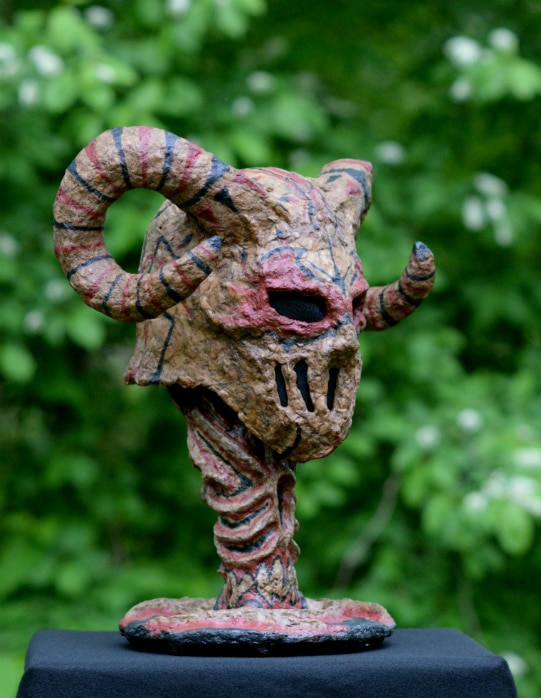 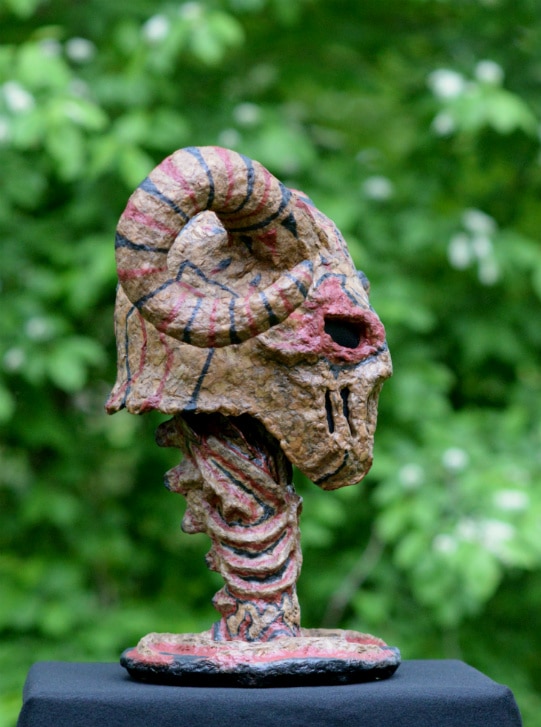