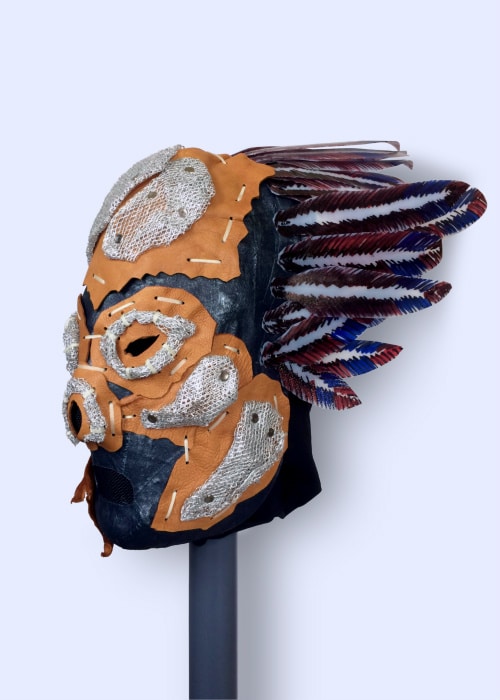 This mask started out with a really simple idea. I was tearing metal mesh out of another mask and thought that the mesh looked kind of artistic. Usually I just throw it away but I wondered if I could make some interesting “junk mask” out of it.

I played around with making the mesh the main structural element of this, but quickly realized that wasn’t going to work, at least with the amount of mesh I had to work with. So I decided to scrunch it up into shapes that had some anatomy to them.

But how do I turn that into something wearable?

I hadn’t used leather in a mask before, so I thought it would be interesting to attach the mesh to that. To go with the irregular shapes of the mesh I decided to leave the leather irregular also. 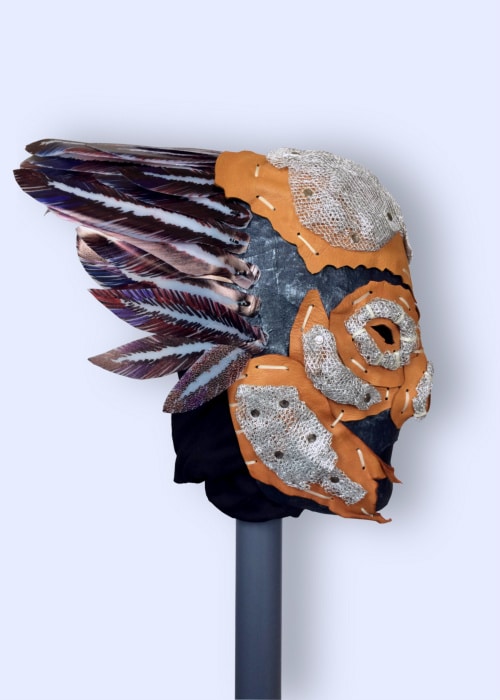 But that still doesn’t make a mask, so what next? They needed to be attached together somehow. I had a really primitive clay face-form I had made. I thought it would be fun to make a shell of cloth and glue using that to shape it. Normally I’m pretty methodical when I cloth and glue stuff, but this time I wanted to try something new, so I made the shell out of two layers of old t-shirt fabric.

This was really quick to do and at first I liked the result. But I soon realized my face-form had an unacceptable recessive chin, and there was some delamination around the back. And I realized I’d need to put in a mouth and nose for air flow. I started modifying the shell, but because it was only two layers of cloth thick, and the t-shirt fabric has polyester which doesn’t behave well in this context, it began to warp. I realized it was just too twisted for what I wanted to do with it and that I needed to start over. (I later made the shell into its own mask.)

I got some more clay, improved the face form, and tried again with more t-shirts. This time the shell turned out much more even, but the delamination of the two layers of shirts was even worse. At this point I knew I wanted to put plastic feathers on the back of the mask, and I foresaw that the exceedingly uneven back edge of the mask shell would not work.

So I started over again. This time I decided to do it the slow meticulous way, using small good cotton strips, to avoid delamination. I also did some online research about glues which inspired me to make a new mix. This new mixture is slightly heavier than normal but greatly increases the strength of the cloth shell. Even though it’s only about three layers of cloth thick it is quite strong and stable.

Afterward I made the holes and pre-positioned all the elements onto the mask before painting the shell. This was a long, tedious process–partly because my glue mixture worked so well I had to drill all the holes instead of punching them with a sharpened nail like I originally intended.

This mask has a lot of new elements I’ve never tried before, but at the same time, it combines techniques from many previous projects. So it’s sort of old and new at the same time.

The parts that you see such as the leather and the metal mesh, I spent the least amount of time on (when I made them, I thought this was going to be a quick junk mask). Figuring out the shell and how to attach everything. If I had it to do over again I would attempt to reverse to spend more time on what you actually see.

In any case, this was a useful experiment.