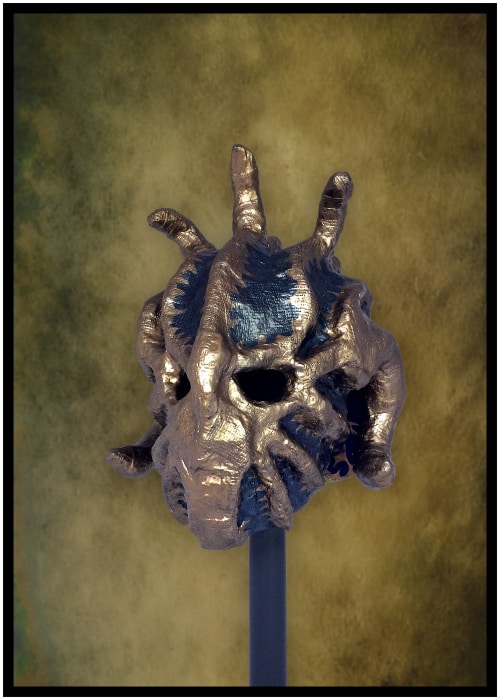 I began this around Christmas of 2015. I hadn’t worked on a mask or completed three-dimensional art in a while, and the big masks I had made in the past were still unfinished. The main rule for this was to make a finished wearable piece, even if it isn’t “perfect.” Also to just have fun and not get too caught up in the details.

I made the shape out of aluminum foil and masking tape, then covered it in plaster of Paris bandage strips. This is the first and only time I’ve used this material. In the moment I thought it was a great innovation for making masks. It was indeed a step forward, but in this context it’s made obsolete in just about every way by cloth-mache. Unlike that method, plaster is heavy, brittle, and leaves a bunch of tiny depressions in the surface from holes in the bandages.

At first I attempted to get rid of these holes by filling them with glue. After a couple of layers it became apparent that they wouldn’t fill up as I hoped. In the spirit of just getting it done, I didn’t stop to try other methods, but moved on to painting.

I thought about painting this red, but dismissed the idea as too much of the obvious choice, given the horns and possibly evil appearance. So I went with blue instead, and lightly brushed it with some silver paint to give it a sheen, and then added the gold.

This mask has an unusual shape for a project of mine. It isn’t a face-only mask that could be strapped to the wearer’s head; but it isn’t a helmet either. To make it wearable I glued in a Velcro harness and pieces of foam padding. This is the first mask I made with these materials in it—a big innovation.

It’s also the first (and so far only) mask with any major cloth element. This skirt, or cape if you prefer, is there to cover up the back of the wearer’s head. I don’t know how to sew, so I glued together strips of fabric, and made it detachable from the mask with more Velcro. I painted some gold patterns onto it.

When I look at this, its roughness and asymmetry has an ancient, bony sea-creature style that I quite like. I also like how the horns and some of the other elements create recursive patterns of curved shapes. This mask is a transitional form that shares anatomical elements with both my older and newer work.