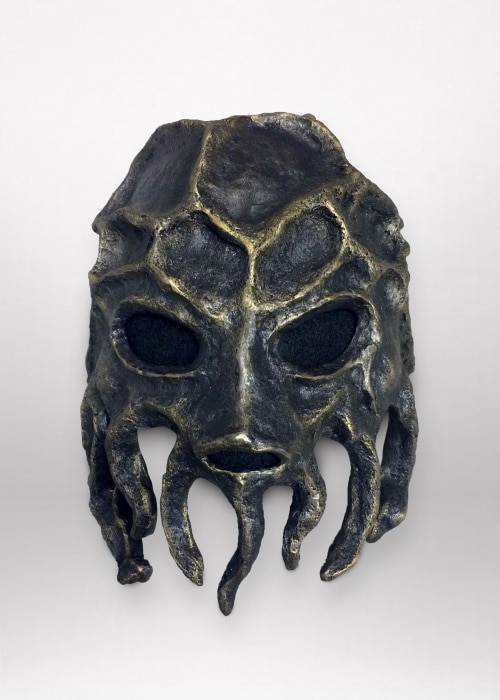 I decided to make this, another paper napkin mask, because it had been a while since I’d used that material. For the basic shape of it I reused my clay face-form from earlier projects.

When I first envisioned this I imagined asymmetric plate-like structures on the forehead. Turning that vision into reality would have required way more napkins, carving, and overall work than I wanted to put into this (it was partly intended as a relaxation project), and it would’ve made this pretty heavy. So I decided to go with ridges on the forehead instead.

I like the bent, uneven shapes in an earlier mask of mine and wanted to take that farther here, so I made the teeth bigger and more asymmetric in a way I thought looked interesting. 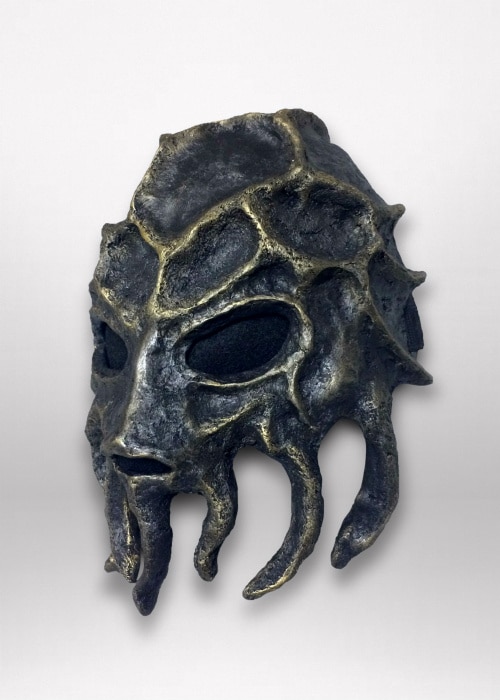 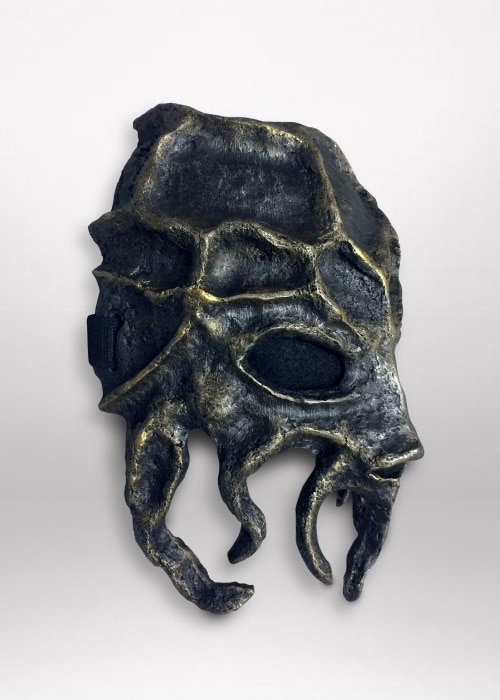 Overall I followed standard construction procedure for this sort of papier mache: Apply wet material, wait for it to dry, carve and smooth with grinder, repeat as needed.

At one point I ran out of napkins. There was a lot of toilet paper around so I thought, why not use that? I ground it up and mixed it with glue, and used it to fill in the eyes, add height and smoothness to some ridges, and for general patching.

Toilet paper makes a papier-mache with finer texture than paper napkins. It’s easier to turn into a pulp and also easier to carve with a grinder. It is, however, a bit weaker and softer than the napkin stuff. But because main structure of this is made from napkins I’m not worried about it breaking.

When I make something with ridges like this, I have to tendency to want to make all the ridges smooth and even. I also just don’t like the idea of eroded-looking ridges. But this can make projects become quite tedious, and the ridges can end up looking too bulky; the whole thing risks becoming overwrought and stultified. I intentionally did not overwork the ridges on this one. And I like how it turned out. Actually I like some of the pitted, rougher areas a lot in this design, as I think they have more character than the smooth parts.

Because this has ridges I decided to paint it in a manner similar to a ridged black and gold sculpture I had made a while back. The painting was pretty straight forward: black, and then gold (technically iridescent bronze) for the highlights, then sealer spray.

This has sewn-in elastic straps to make it wearable. They’re tucked in back of the mask so you can’t see much of them here. For the pictures I put felt in the eyes and nose. This can be removed and I may glue in mesh in the future; then again, I might leave it open.