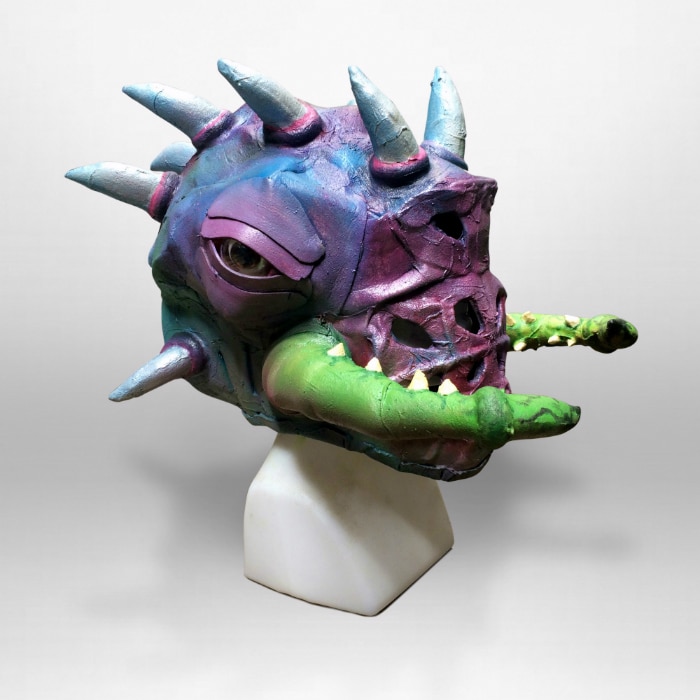 Big Nazo is a company in Providence, Rhode Island that makes creature suits and masks for live performances. Early in 2018 I talked to an actress/puppet-maker about some of my artistic and professional goals and she highly recommend I contact Big Nazo.

I took her advice and some weeks later met with their founder and director, Erminio Pinque. Minio (as he goes by there) asked me to bring some of my masks in. Now my masks aren’t always the easiest thing in the world to transport, because they often need a box with some padding, and if you have full-sized helmet-type masks, the size and number of boxes gets pretty big pretty fast. So after some thinking I brought in what I considered to be a representative collection of larger and smaller pieces that I could fit into three boxes.

Going in I really wasn’t sure what to expect, but Minio was very complimentary and enthusiastic about my masks, and invited me to come back and make something using his methods and materials. He primarily makes things out of various types of foam and latex, with some cloth elements, and his pieces tend to be geared toward performances. He also had questions for me about rivets and some of the materials I’ve used, so this seemed like a great opportunity to learn and share information.

To build this, I’d alternate going to the Big Nazo studio, to learn the next steps I needed to take and pick up more materials, and working at home, where I did almost all the actual construction. If you’ve read my other mask descriptions you know I tend to go into some details on the process and materials involved in each project. Here I will be a bit more vague than usual, out of respect for being shown someone else’s process. 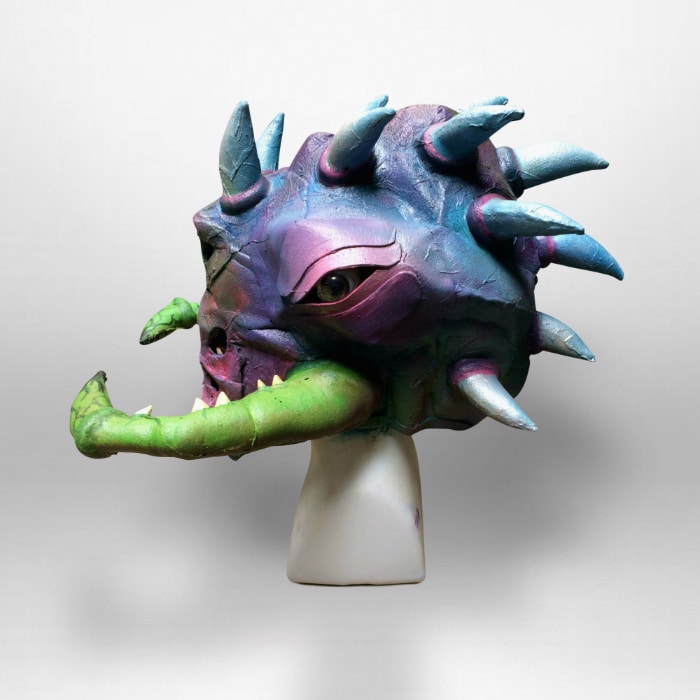 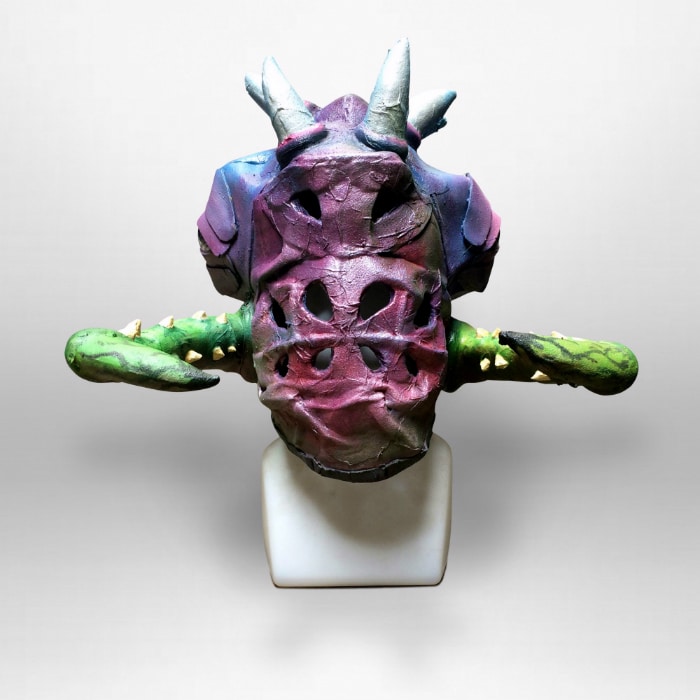 This mask began as a big sheet of thin white foam. The fundamental construction method is stapling together pieces of foam into larger shapes, and then combining those shapes and adding ornamentation and details. Minio’s early directive for the design was to make it “like a diseased alien” and not too pretty or symmetrical. Though Minio didn’t suggest this, I made a mask shape out of aluminum foil and duct tape and then used that to create a template to cut out my foam pieces. This created some interesting shapes but not what I intended, and indeed, I ended up turning the mask around so the back became the front!

Most of the time I didn’t have a concrete plan or vision for how this would turn out, because I didn’t know what steps were coming up in the process, and how they would affect the look, and didn’t know how close I was to being finished with it. Minio didn’t teach me every step, because he said he wanted me to do things wrong so I understood the reason behind doing things right later on. I did a decent amount of figuring on my own how to make things work.

So this very much evolved over the course of construction, and barely looks like the original template design. Stylistically it moved away from “diseased alien” and became more of a sea creature. The biggest thing I’d change on this is making the back more symmetrical.

Though materials always impact design, this proved especially true for me making this mask. Its look is very much related to the way foam bends or can be attached together, and how paint and latex mix.

I painted it in a few sittings, mainly at the Big Nazo studio, following a much faster technique than I usually do.

Because this is made out of foam and latex, it’s very light weight for its size. There are enough holes in the front of the face to provide okay vision and good breathability. It’s also relatively durable and won’t break if dropped or flexed.

This was also used during a Big Nazo performance at the Just for Laughs Festival in Montreal in July of 2018.