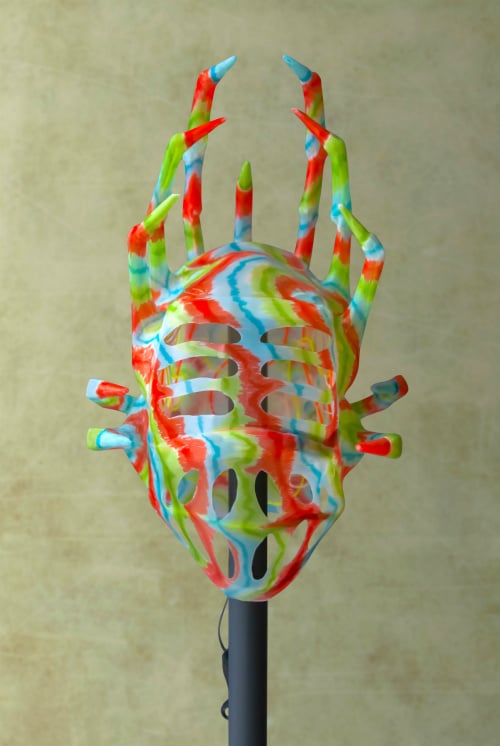 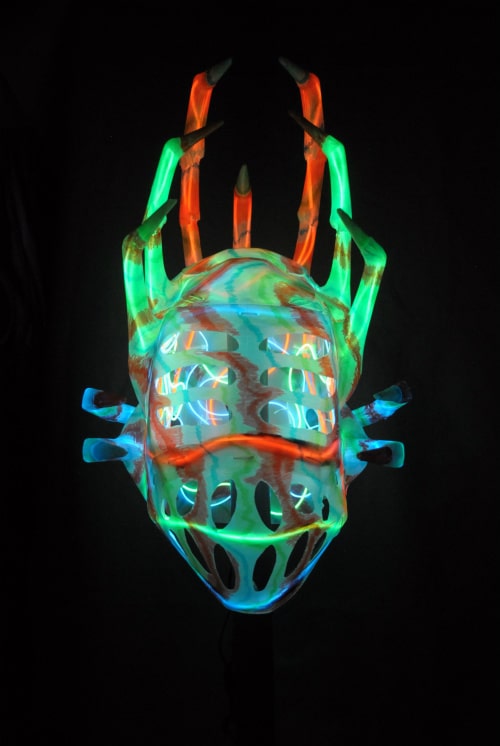 I got the idea for mask after walking around at night in a crowd wearing Yellow Octopus. People seemed to enjoy the lights and general appearance of that mask. On the other hand, it was very hard for me to see while wearing it. So I thought it would be interesting to make something even bigger and brighter, but with greatly increased visibility.

This gets its basic shape from a two gallon water bottle. This is the first time I’ve used one of these. You might think that it would save a bunch of work because a bottle that size is already basically big enough to stick your head in. Actually this isn’t the case. There are a lot of ridges that I needed to cut out, along with the handle on top, the spout, the bottom, and the front, so while the two-gallon bottle did lend its general shape and provide a backbone for the project, it didn’t particularly streamline construction. 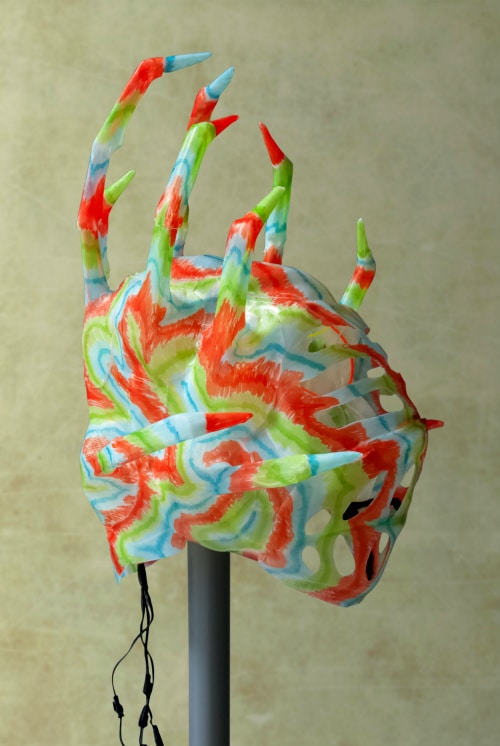 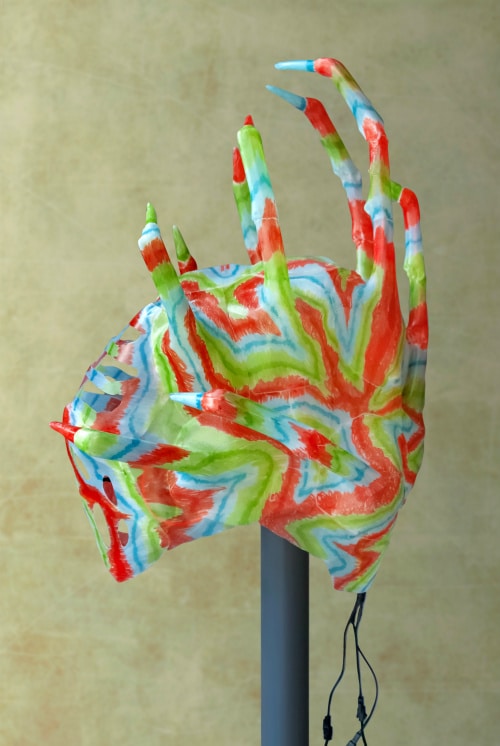 Putting on all the spikes probably doubled the length of the project. It was a lot of work making so many of them and getting them relatively even in shape. I used cable ties to attach most of them to the main structure. This let me get a good solid connections in areas where I wouldn’t be able to reach in and tie knots in thread.

Normally I wouldn’t put so many eye and air holes into a mask because it’s too easy to see the wearer’s face through them. But this is specifically designed to be worn at night with the lights on. When they’re on and flashing, they pretty much obscure the wearer. 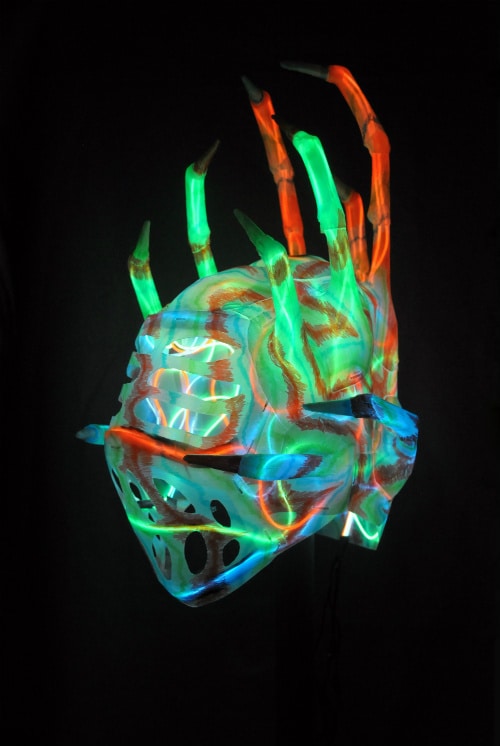 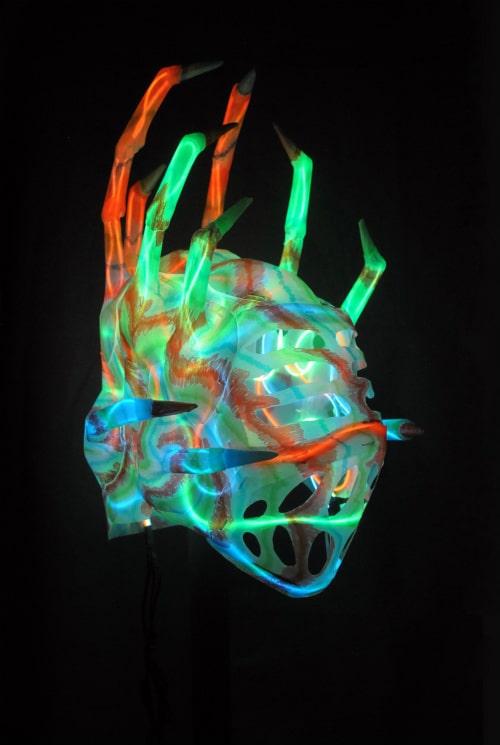 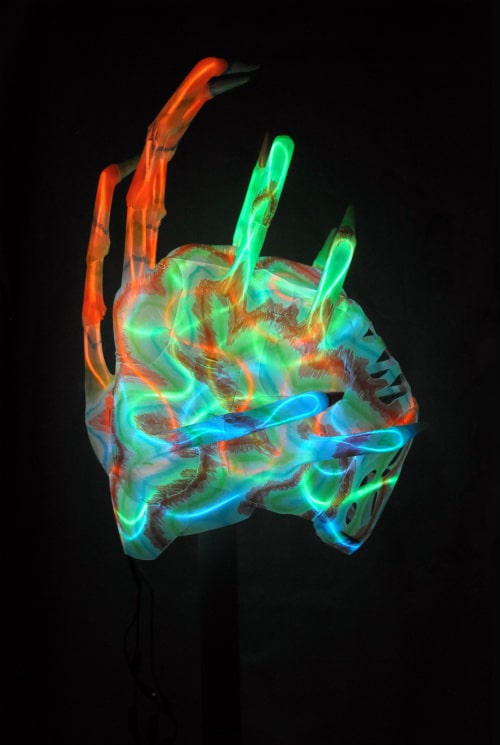 I found the coloration to be a challenge. When this is lit up it has a glowing deep-sea-creature look to it, but when it was blank and without lights, I wasn’t sure which way to go. The shape doesn’t dictate an obvious color scheme, and I wanted to use light colors to let the lights shine through, so this limited my options. (If I didn’t care about lights I could color this red and black and be done with it.) Eventually I decided to make a repeating pattern of three colors that would mirror the three colors of lights I intended to use.

It’s a big piece, but because it’s made of plastic bottles, it’s quite light and comfortable. The eye and air holes provide good vision and breathability.